Top Biggest Purchases Ever Made With Cryptocurrency

Cryptocurrency is lately used all around the world to make purchases in the different marketplaces available. With cryptocurrency, you can readily purchase almost everything from mobile phones and other gadgets to sports tickets and so on.

Over the years people have bought quite a lot with cryptocurrency, there are, however, some purchases that caught the eyes because of their value. Some outrageous purchases have been made with cryptocurrency with many still emerging in recent times, who could have imagined something as ordinary as two pizzas being bought for about $7 million? Outrageous, isn’t it?

As much as some big money purchase has been made using cryptocurrency, there is more to come in the crypto world as many expensive properties have been put up for sale requesting cryptocurrency for payment especially for real estate, cars, and even yacht.

Here are few of the big buys in the crypto world you will be surprised to know happened.

Converting the bitcoin involved in the transaction to dollars equals a whopping sum of $147 million, however, what the unknown person bought with this huge sum of money remains unknown as the person himself. No doubt he must have bought many expensive, lovely things.

It is known to all that the rich and famous usually charter private jets for their trips and holidays alike. However, they are no longer alone in the game, the bitcoin millionaires have also joined in the charter of private jets using bitcoin to pay for the service.

PrivateFly.com a UK-based private jet charter service has reportedly by CoinDesk allowed a passenger to charter a private jet for his trip from Brussels to Nice. CoinDesk put the estimated cost to have been as much as 54.95 BTC equaling $46,706 as at the time of the transaction.

The transaction might have prompted SkyCraft Airplanes to now allow buyers to purchase a plane from them using bitcoin.

A car lover based in Florida has according to Newsday purchased a Tesla Model S car with bitcoin in December 2013. The car is said to have cost about 91 bitcoin which is equal to about $103,000 at the time of the purchase in December 2013, and the buyer not known.

The Tesla Model S buyer turned out not to be alone as someone also posted pictures of a Porsche car he bought with bitcoin on the forum BitcoinTalk; the car has a license plate “BITCOIN.” The cost of the purchase is unknown. 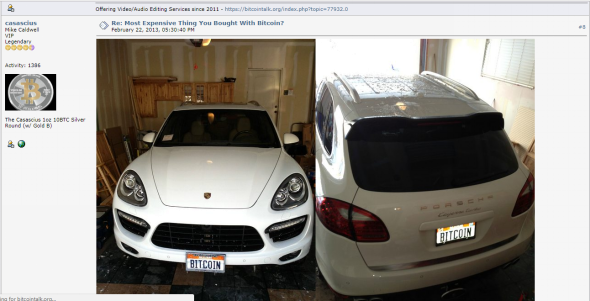 Though as at the time of purchase in 2010 the value of bitcoin was quite low and no one would have imagined the value to have become as great as it is now. Hanyecz will unarguably wish he had held on to his bitcoin without buying the Pizza back then.

Bitcoin is now lately accepted as payment for real estate purchase as Fox News reported that a mansion worth $7.85 million was put up for sale by a developer in Las Vegas who was eager to accept bitcoin for the transaction.

Another case was a ranch house on the sale with bitcoin in the Hamptons worth a sum of $799,000 according to Business Insider 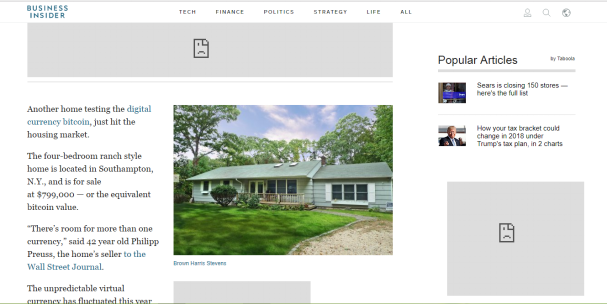 Notably among the real estate transactions with cryptocurrency is the one involving Gregory Simon who according to CoinDesk had in San Juan Del Sur purchased a plot of land in Nicaragua. The land is said to have been located not far from the Paradise Bay Beach.

Currently, around the world, there are a lot of expensive things to purchase with cryptocurrency as many car companies now accept cryptocurrency for their transactions. It is also currently widely accepted for real estate purchase.

There is a wide range of mouthwatering services you can get using cryptocurrency such as private jets charter among others. No doubt the crypto world is fast growing and is here to stay.

Stephen Schroeder is the founder of Turtler and loves using the app to lessen his wife’s stress when he’s bicycling as far as he’s allowed to go.

Are you still wondering what cryptocurrency is? Your answer is right here. Cryptocurrency is a decentralized currency without a server or central authority of any sort. It is otherwise known as a digital currency which cannot be politically influenced and unlike the usual currency has its value protected with a potential to increase in the long run.

Top Biggest Purchases Ever Made With Cryptocurrency

Cryptocurrency is lately used all around the world to make purchases in the different marketplaces available. With cryptocurrency, you can readily purchase almost everything from mobile phones and other gadgets to sports tickets and so on

It could be quite worrying for a buyer to buy from an unknown person because in the crypto world the identity of both parties is not revealed. Sellers can as well be faced with the problem of a buyer refusing to pay for products and services delivered; here is where escrow services come in.